I wanted to make a post celebrating Mary Robinette’s Glamourist Histories because it is one of the few more-than-three-book series that I’ve read to the end. Actually, all of those series ended last year, so I was going to do tributes to all of them. I still may, but I wanted to start with Mary Robinette because this is her birthday.

So, in honor of Mary Robinette’s birthday, I present a short post about the book.. and some fan art.

The Glamourist Histories take place in an Austen-inspired world where it’s possible to weave illusions out of the ether. The protagonist, Jane (as a nod to Austen), is quite a skilled glamourist, but women’s dabbling in glamour is considered frivolous. Jane is set up in a similar position to the protagonist of Pride & Prejudice — and sure enough an arrogant nobleman shows up. He is one of the most talented glamourists in England, and while he is initially grumpy toward Jane, they eventually follow the P&P path, fall in love, and get married.

One thing that’s true of all the series that I have continued to the end is that the books often improve over the course of the series. Sometimes the first book is still the strongest, but the second book probably isn’t weak, and the third book might be even better than the first. (For me, the real dealbreaker with a series is if the books go constantly downhill, no matter how high the starting point.)

One of the things I like best about the Glamourist Histories in particular is how much the setting, characters, and voice developed over the course of the series. For me, book one was fun, but so heavily like Austen that she seemed to loom over the story. Book two was a radical departure, taking these Austen-like characters and Austen-like setting and shaping them into new things. It’s not that the series loses the sense of or tribute to Austen. It just gains its own charm.

Over the series of the novels, the theme of pride and prejudice continues to be explored. Jane must face a series of prejudices (beginning with prejudice against the Irish, which seems quaint to us now, but.) until, in the final book, she end up at an Antigua plantation owned by her husband’s family. (Spoilers on the treatment of race in rot13: Fur’f abg n juvgr fnivbe. Fur’f n juvgr nffvfgnag, naq n juvgr trnef-ternfre, ohg fur’f abg gur juvgr ynql jub pnzr va gb fnir gur urycyrff fynirf.) In real life, I respect Mary Robinette for her dedication to making our own world better; Jane, too, is learning about her world so that she can dismantle her prejudices and help people where she can.

In a way, the progression of the books can be read as a criticism of Austen–after all, Austen’s heroines are firmly rooted where they are, when they are–and especially in what class they are. I see criticisms of Austen from time to time essentially asking why the ladies from P&P etc. don’t go work in a hat shop or as ladies’ maids because clearly their concerns are frivolous. (I don’t have the feeling that men’s narratives of wanting to succeed are treated the same way, but maybe I’m wrong.) I don’t read the series that way, however. I think this is one of the ways where Mary Robinette is adding her own perspective to Austen’s, thus making it her own. Austen was writing social commentary on her time, within her time, and within those constraints–both physical and ideological. Mary Robinette’s character Jane gains exceptional freedom to travel and move between social circles which would almost certainly not have been available to Austen’s heroines.

I’ve looked forward to getting a new Glamourist History on my kindle every year for a while now, and I’ll be sorry to let them go, although there’s a stipulation at the end of the last book suggesting there might be further adventures from Jane in the future. I hope there are.

I’ll close with one my favorite memories relating to the series: When the first book, Shades of Milk & Honey, was nominated for the Nebula Award, Mary Robinette attended the ceremony in a beautiful, handmade regency gown with period undergarments. How cool is that? 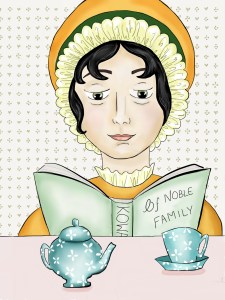 (I’m learning what I can do with Paper with my new stylus, so that’s why there are like 8 different techniques in there. Her face is based on the famous portrait. The tea pot and tea cup are shaped like things I found when I google image searched “regency tea pot/cup” and the regency wallpaper was inspired by a similar search.