Posteriors for Posterity: An update on my fundraiser for LGBTQ health

It’s halfway through my Making Lemons into Jokes campaign, and I wanted to give an update.

Among other things, I wanted to clarify why I’m doing this. For people in the know, the reasons are obvious–but obviously, most folks aren’t.

Let me start by repeating a modified version what I said in my original post:

In my family, humor has always been a way of putting crap into perspective. When life hands you lemons, make jokes. And then possibly lemonade, too. It is coming up on summer.

In that spirit, I’m trying a self-publishing experiment. And that experiment’s name is “If You Were a Butt, My Butt.”

If my Patreon reaches $100 by the end of the month [Note: it has!], I will write and send “If You Were a Butt, My Butt” to everyone who subscribes with at least $1.

I will be donating the first month’s Patreon funds to Lyon-Martin health services. Lyon-Martin is one of the only providers that focuses on caring for the LGBTQIAA community, especially low-income lesbian, bisexual, and trans people. They provide services regardless of the patient’s ability to pay.

You don’t have to keep on paying into my Patreon  in order to participate! It’s just fine if you want to sign up, get your silly thing, and just support Lyon-Martin. I’ll send out a note after I release “If You Were a Butt, My Butt,” and remind folks to unsubscribe if they want to.

I also release a piece of original flash fiction or poetry to all my subscribers each month, so you’ll get June’s, too, along with the Butts, whether you keep on subscribing or not.

Humor can turn anything ridiculous. That’s part of its healing power. When that’s the aim, being mean-spirited or nasty defeats the point. I can’t promise I won’t make any metafictional jokes, but I’m not going to focus on it. The rare times I do, it will be silly.

That’s the plan! But I didn’t include the why of it all.

Short version: A bigot is using the Hugo Awards to harass me and LGBTQ people, so fuck him. Let’s follow the Scalzi strategy–and raise money for something he hates.

Long version: A few years ago, I wrote a short story called “If You Were a Dinosaur, My Love.” Sometimes stories take off, and this one did. I was honored by how many people it moved–people still come to me at conventions, and over social media, to tell me that the story was important to their lives.

“If You Were a Dinosaur, My Love” was nominated for the Hugo Award and the World Fantasy Award, and won the Nebula Award. For some folks in the science fiction world, this was cause for such a clash of sturm und drang that they aren’t over it years later. I admit I remain baffled as to why. There have been award winners throughout my life that I disliked for aesthetic or political reasons. The correct response–if you decide to respond at all (I usually don’t)–is talking about it, and mobilizing. It isn’t harassing authors.

Unfortunately, some of the folks who are in a snit have decided to go for the harassing. The white supremacist ring-leader has targeted minority writers before, including successful African American author N. K. Jemisin. He used our writers’ union’s resources to propagate his hateful, racial harassment, calling this accomplished writer a “half-savage” and implying she should be shot. The first, unmoderated comment on his post added that she should be gang raped as well.

I was one of the people on the union’s board at that time. So were other authors he has subsequently harassed, including John Scalzi and Ann Leckie. I am proud to have stood up for Nora against his harassment. But it put me on an enemy’s list–and here we are.

Although he and his followers are happy to use any excuse to harass me–anti-Semitism, sexism, fatphobia–mostly he’s gone after me and my readers for being queer. The bigoted rhetoric is especially nasty to trans people. And come on. Like they need more crap.

That’s where the Hugos come in. Since trolls gotta troll in order to justify their petty lives, they decided to troll the Hugo Awards. Want to know why? The same reason the neighborhood bully knocks over your Lego tower. They can’t figure out how to make one of their own. Using underhanded tactics, they nominated a “satire” of my work to the ballot, which the white supremacist posted on his own blog. As the publisher, he included a comment saying I should be killed. Sure, it’s phrased as a “joke.” But the dogs can hear the whistle.

It’s been a pleasure watching the trolls get trolled, but let’s be clear–there’s still harassment going on.

I deserve better, and so does the LGBTQ community. Let’s be fun. Let’s be silly. And let’s raise some fucking money for poor queer people who deserve the same medical care as everyone else.

Would I also like people to support my Patreon? Sure. Real talk: I’m an author, and no matter what you’ve seen on Castle, most of us don’t make much dosh. My household is looking at a 50-66% reduction in income over the next year, so I need a hustle or two. I’ve built my career writing art house short stories. Perfectionism takes time! And when you’re doing freelance piecework, more time means less pay.

But you don’t have to support me at all. You can still have fun, participate in something silly, and send all your support to Lyon-Martin. They deserve your help!

So far, I’ve collected enough money to write “If You Were a Butt, My Butt” and make an audio version, too. I’m very close to reaching $300. Help me get there!

I hope you’ll consider donating. Because hate in the world is the worst, but we can counter it by doing good in the world. And by remembering to laugh. 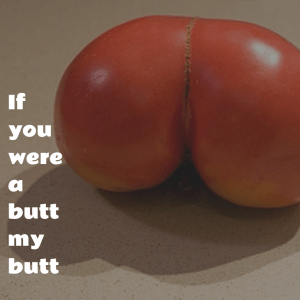 3 Responses to Posteriors for Posterity: An update on my fundraiser for LGBTQ health